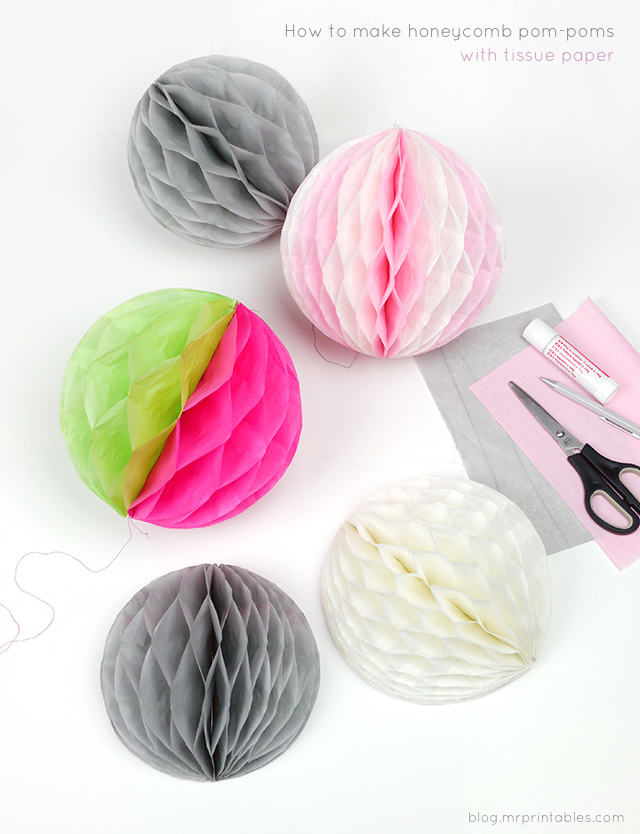 I’m seeing lovely honeycomb pom-poms floating around here and there and they make me happy! They seemed quite straight forward to make so I tried making them with some tissue papers I had.
It turned out really well – easy to make and quite satisfying, so I’ve made this little tutorial for you. It’s magical when you first open them up into a ball!
You can use any thin paper you have and get creative with color combinations. Honeycomb pom-poms can be used for party decorations, photo shoot backdrops for special days, mobiles or cheerful wall decoration for kids rooms. They’re sure to lift your mood any day! 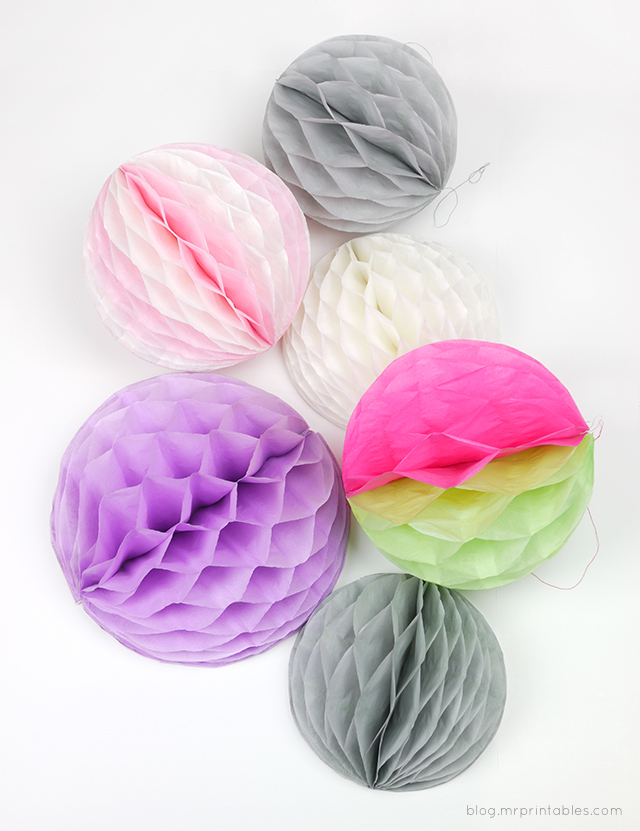 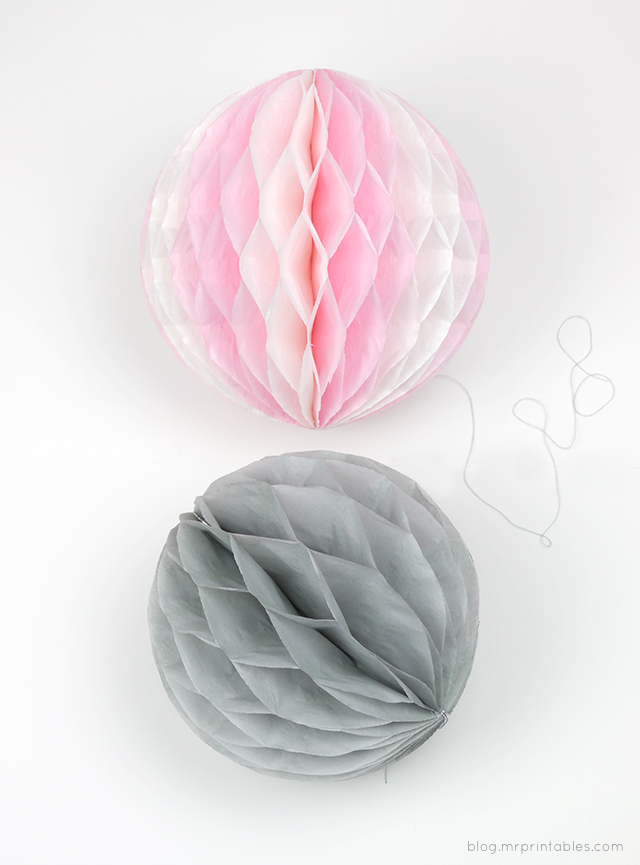 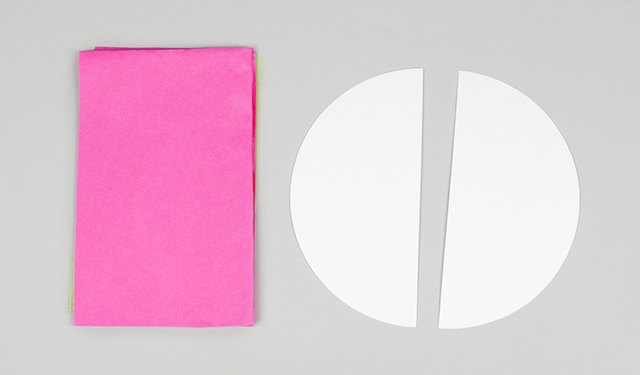 How to make Honeycomb Pom-poms

1. First, decide what size pom-pom you want to make and cut a circle from cardboard. Cut the circle in half.

Take multiple sheets of tissue paper and layer them on top of each other, now fold these in half to make double the layers, then fold in half again to create loads of layers. Now cut out a rectangular square that’s comfortably bigger than the half circle, you want to end up with around 40-50 sheets.
The number of layers you need varies depending on how dense you want to make your honeycomb but FYI, I made all of my pom-poms with 40 to 50 sheets. 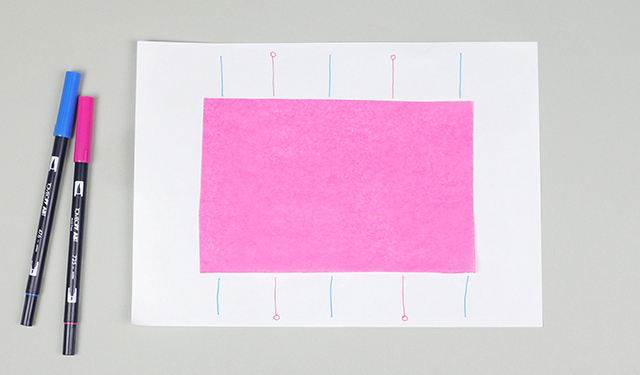 2. Take one sheet of the tissue paper and place it on a larger piece of scrap paper. Now we’ll need to divide the width of the tissue paper into a few equal sections by drawing marker lines in 2 alternating colors as in the photo. How close the lines are to each other determines the cell size of the honeycomb.
I made the first one with roughly 1 3/4 inch (about 43mm) wide spacing and another one with about 1 1/4 inch (30mm) spacing and you’ll see the difference in result later in the photos. You don’t actually have to measure accurately or follow these examples, just make sure the spacing lines are fairly even.
It also doesn’t matter if you have an odd or even number of lines, they just need to alternate like A-B-A-B- etc. and you need to clearly mark them with 2 different colors or other markings. 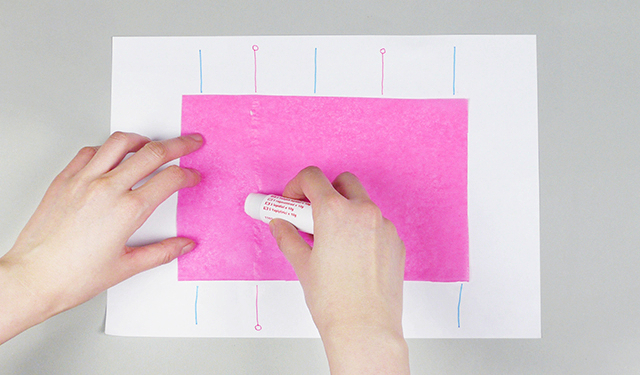 3. Pick a line in one color first, grab your glue stick and run vertically across the tissue paper as if connecting the lines. I found it easiest to hold one side of the tissue paper firmly and work from the middle to the edges. Hold your glue stick at an angle if necessary so the glue line is not too thick. Do the same for the rest of the lines in the same color. You’ve finished your first layer! 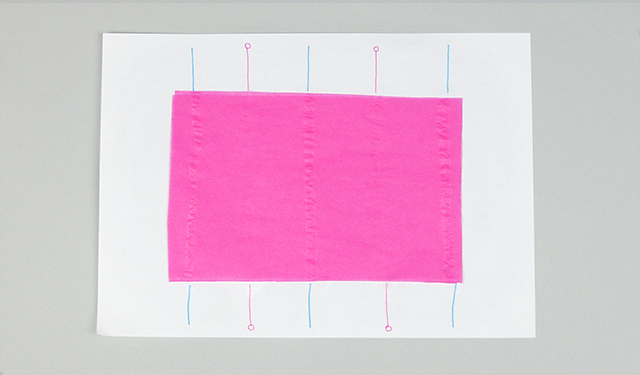 4. Now place another sheet of tissue paper on top. Rub it well. Now choose the line in the other color and repeat the gluing procedure as before. You’ll be gluing the lines in areas that were not glued on the previous sheet.
Repeat this with the rest of the sheets of tissue paper. Take care to keep alternating your glue lines between each sheet.
I changed the tissue paper color half way through for the pom-pom in the photo. For another pom-pom I changed the tissue paper every 4 sheets so it ended up with a stripe design. 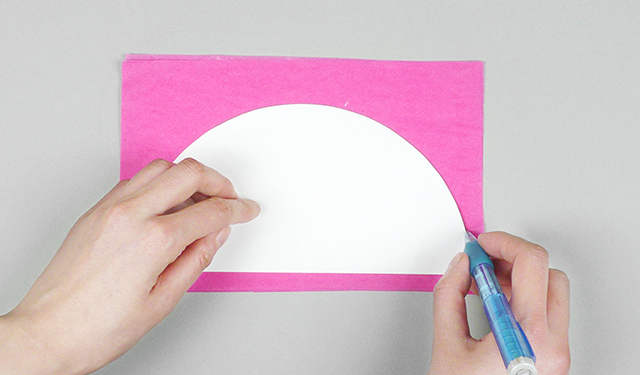 5. When you’re through all the remaining tissue papers, congrats you have your honeycomb paper! You can now cut it into any shape you like but here we’ll use the half circle to make a pom-pom. Place your half circle on top and trace loosely around it. 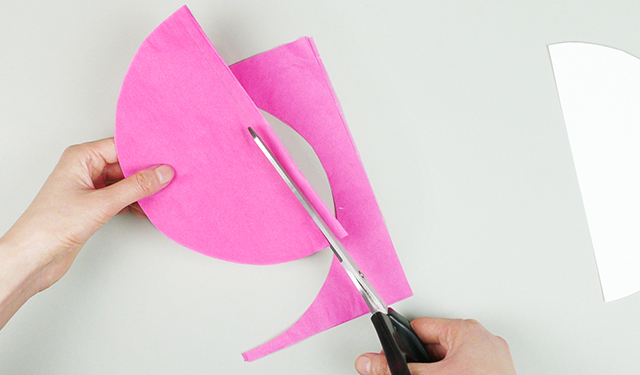 6. Cut along the lines. You’ll be cutting 40-50 sheets together so large scissors really help. 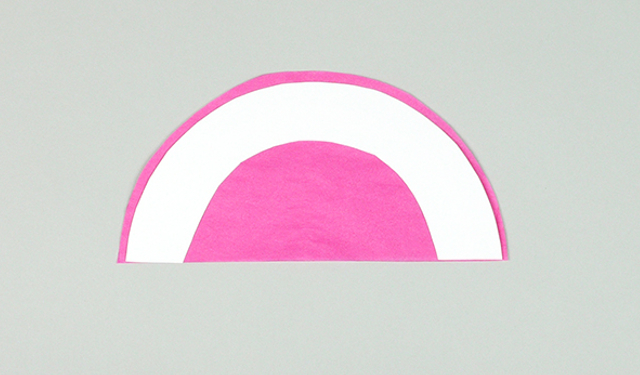 7. Glue the cardboard half circles on both sides of your honeycomb paper.
Note: I used the full half circle at the beginning but it made the pom-pom a little heavy on one side, so later I cut out the inside of the circle to reduce the weight and that’s what it shows in this photo. Other photos show the full half circle. I also made the cardboard circle slightly smaller than the honeycomb paper so it hides well when finished. 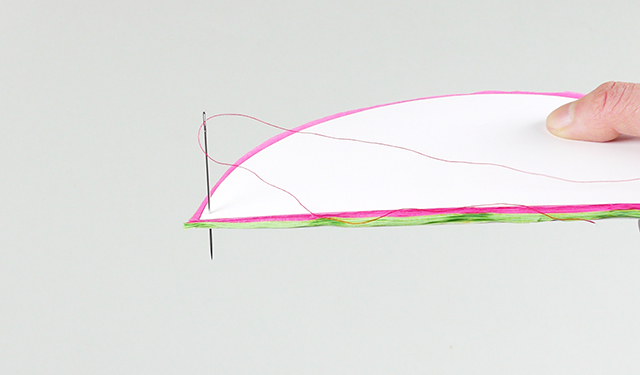 8. Put a threaded needle through tight in the corner of your half circle. 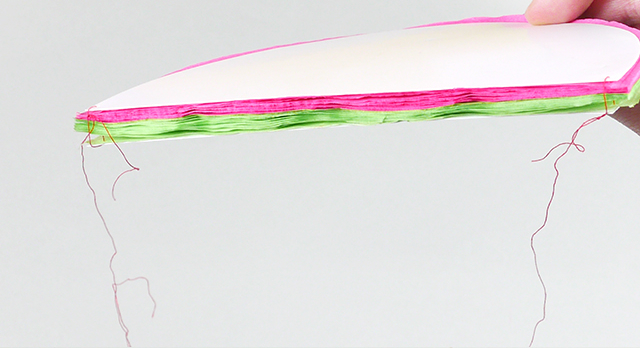 9. Knot the thread but keep some slack, otherwise it won’t open. Do the same on the other corner. You can leave the thread long on one end to hang up the pom-pom later. 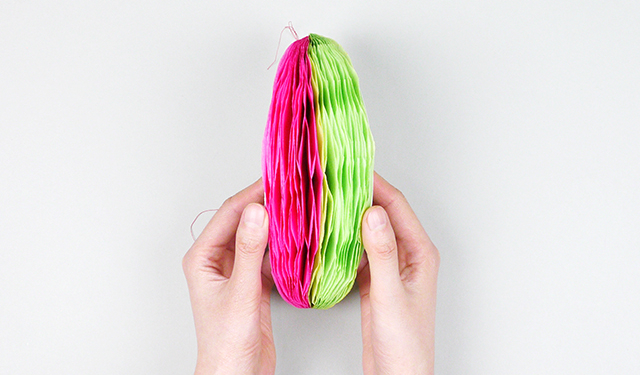 10. Now after all this work this is the exciting and rewarding part! Hold the cardboard on both ends and pull apart slowly. Some parts that shouldn’t be glued might have a little glue residue and not come apart straight away, just keep pulling gently and they should all separate cleanly. 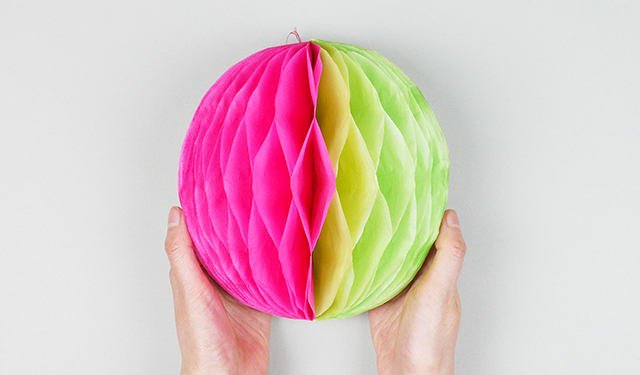 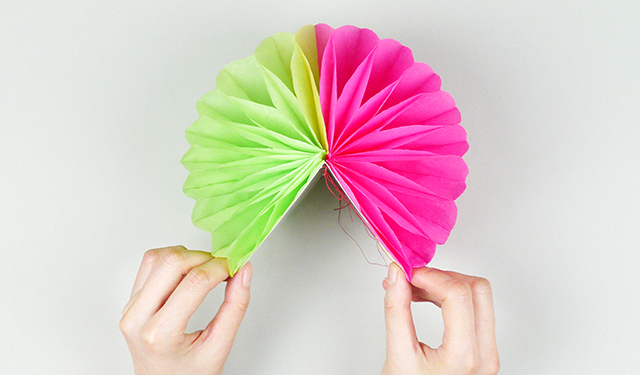 Glue the cardboard ends back to back to form a sphere. I just used looped masking tape so I can store them flat later. 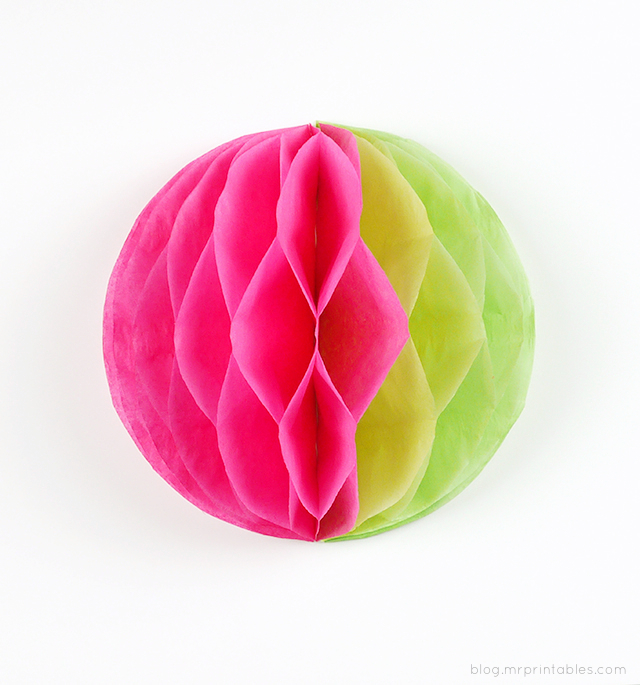 Now, I’ll show you the different pitches of the lines you drew at Step 3 and how this affects the size of the honeycomb cells and density of the pom-poms. 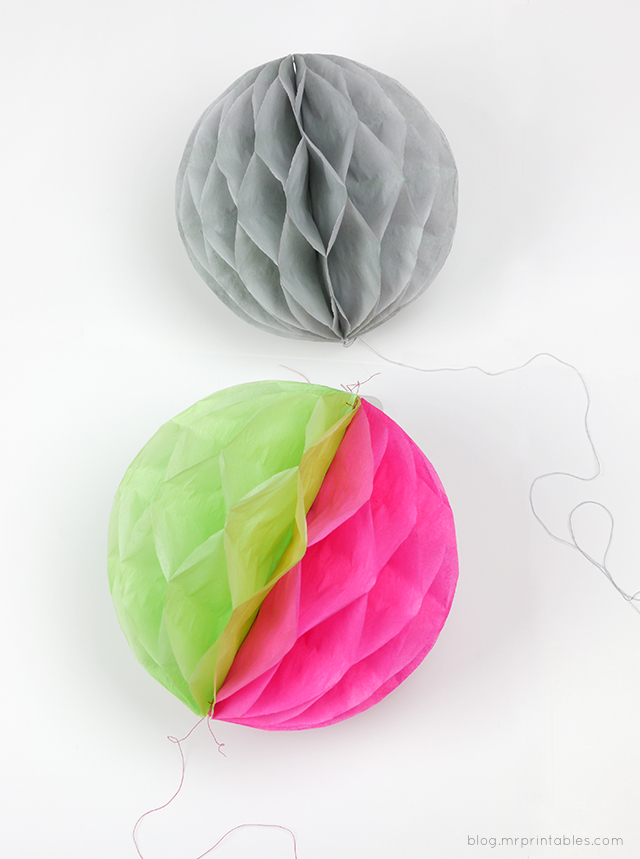 These 2 pom-poms in the photo are the ones with 1 3/4″ between glue lines and are made of 40 sheets. The cells are big and wide open. 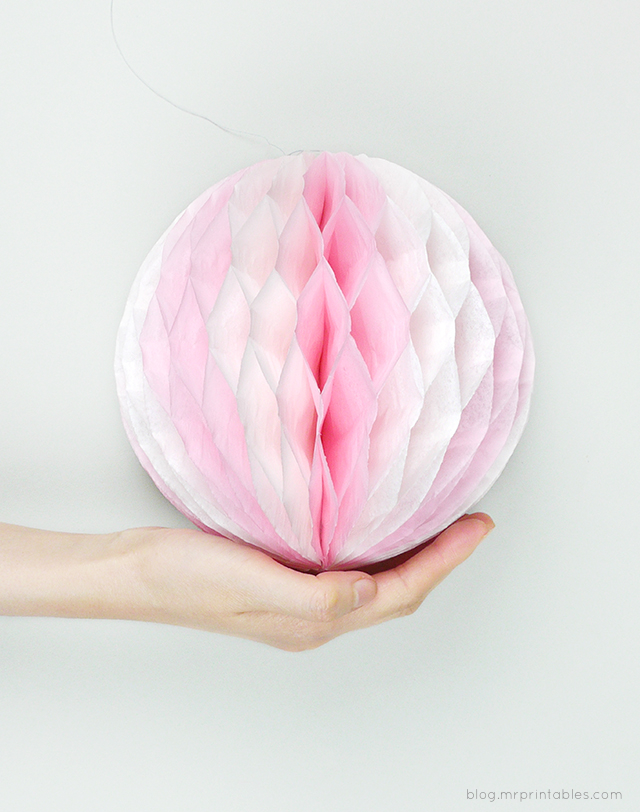 And this pink stripe pom-pom is made from the template with 1 1/3″ between lines and made of 50 sheets. The cells are smaller and the pom-pom’s more dense looking. 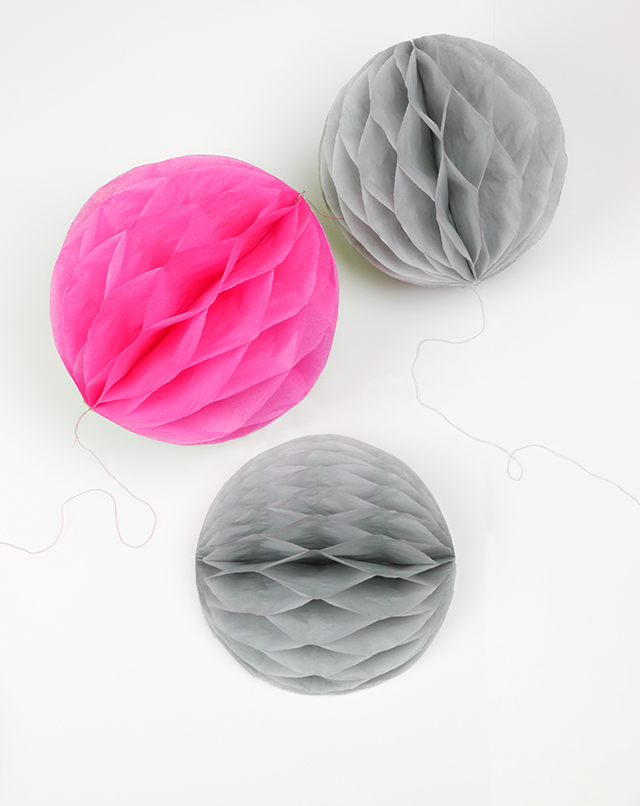 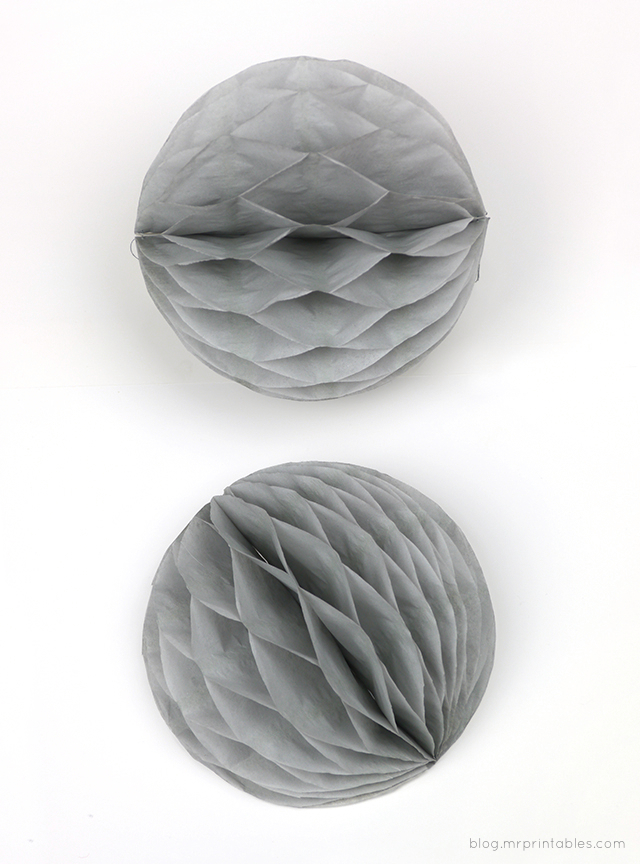 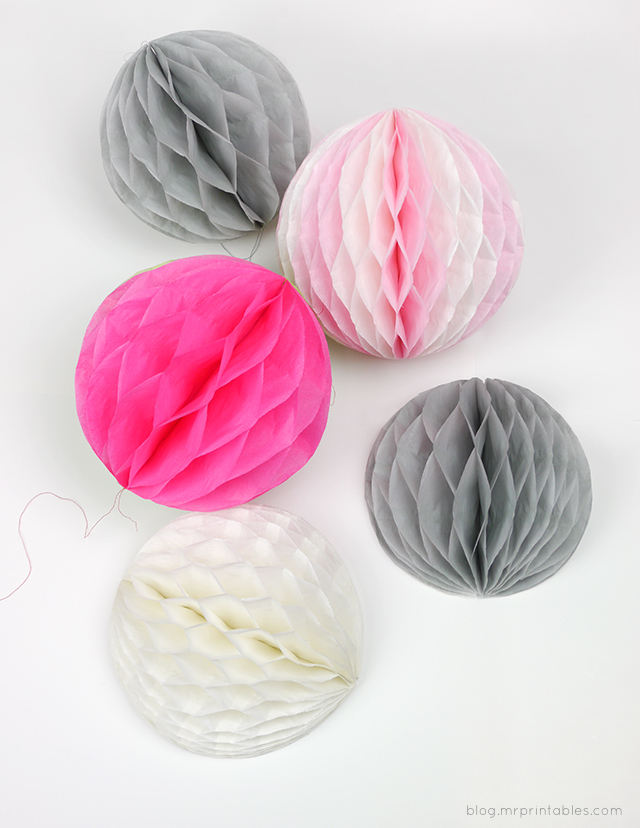 Aren’t they pretty?
Make them together with kids or make secretly to surprise them. I find making them addictive!
Oh and I have a fun idea for using them for another post later, so please pop back.

We love your comments
← Night Lights for Sweet Dreams
Handmade for Kids: Softies by Carambouilles on Etsy →

31 Responses to How To Make Honeycomb Pom-Poms