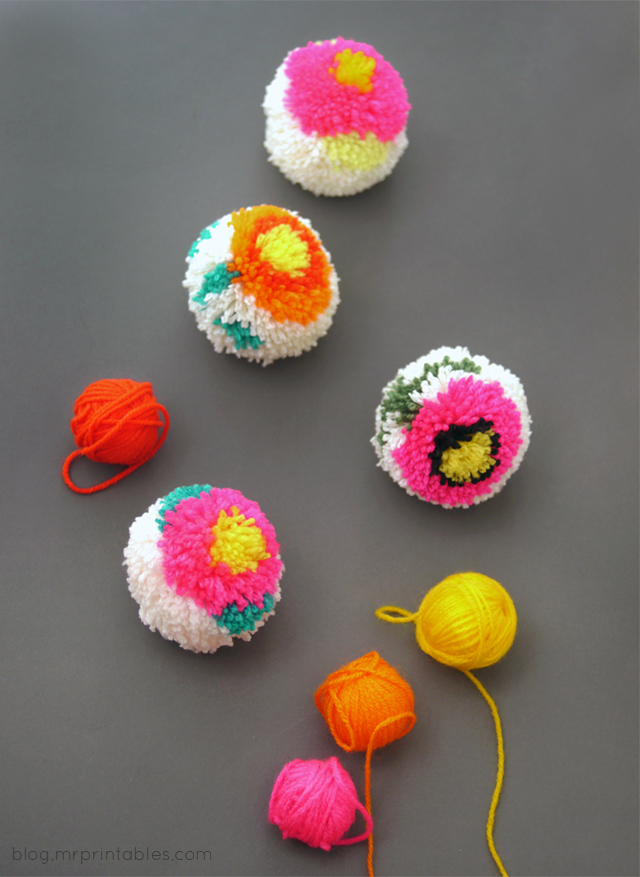 I’ve always loved those fancy Japanese pompoms on Pinterest, the ones that have flower or polka dot patterns on them – they would make lovely handmade gifts for kids! The links always seem to end up at Japanese sites that look like stores and I couldn’t find a tutorial anywhere. I decided to give it a go because once I’d figured out how it works, I’d be able to make pompom flowers, animals, planets … anything out of pompoms! 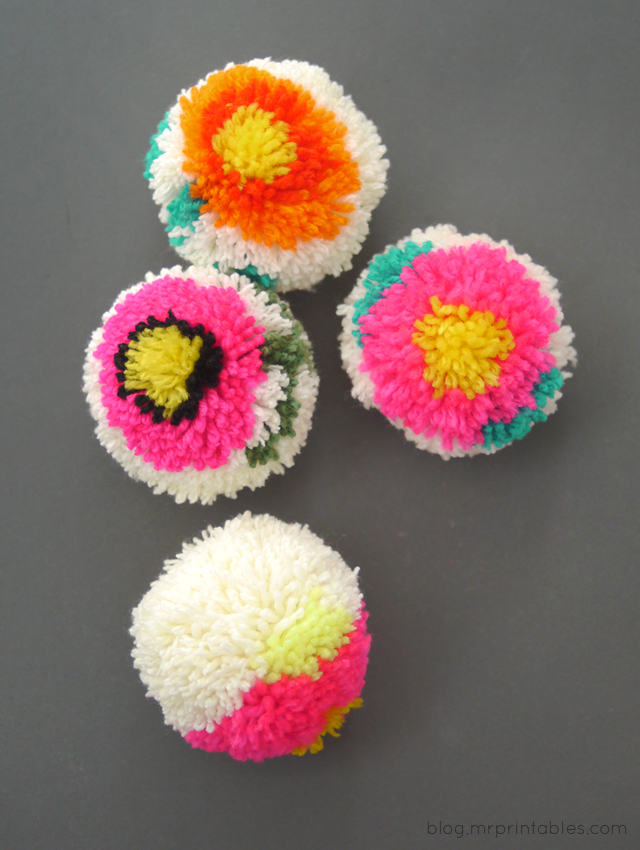 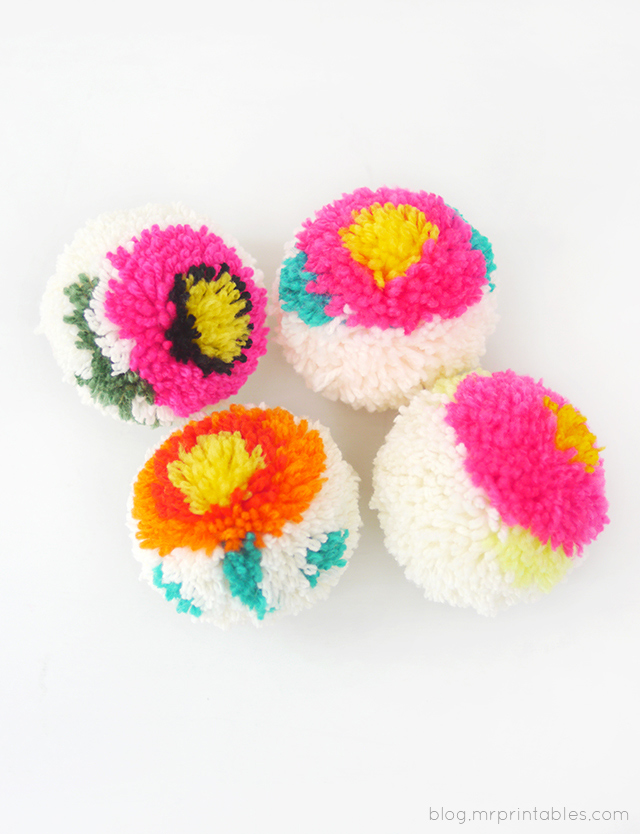 I started by devising a pompom maker out of cardboard. I didn’t really want to buy another plastic thingy I may not use that much and I wanted to see how these would turn out first. I know pompoms look lovely but they may be boring to make or way too time-consuming to be worth it.
Well, after I tried one, I got immediately addicted and made three more straight away in no time! I was very happy with my cardboard pompom maker, they worked so well and are perfectly reusable so I think I’ll stick with them for a while.

So, according to the size you decide, cut 4 half circles with a hole (inner circle) in the middle with extended ends (let’s call them tabs). Make fold lines at each end of the half circle by pressing a ruler across so you can fold those tabs later. Cut smaller half circles and glue them on to the large ones (like the ones on the right in the pic). This is to create some space along the edge between the cardboard pieces when they are put together so you can insert the scissors between them easily. 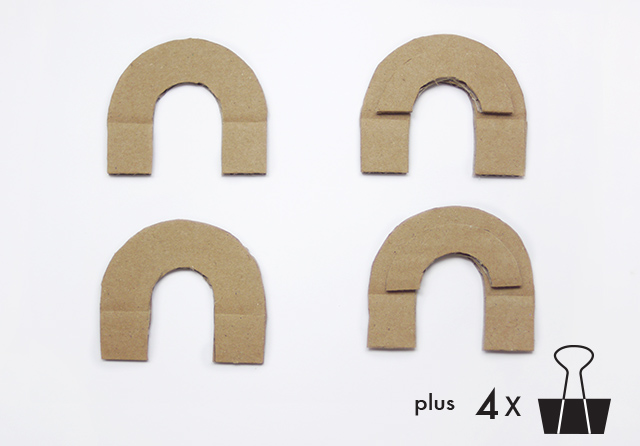 2. The one with the inner part (right in the pic) and one without (left in the pic) make a pair. Put two together facing each other so the small glued-on inner part is between the larger outer arcs. Each pair makes one half of your pompom maker.

3. Now draw your pompom design roughly on paper and draw a line down the middle (dotted line in the diagram below). If you imagine that this line is your pompom maker viewed from the top, you can see how the yarn should be layered based on your drawing. Starting with whatever is directly in the middle touching this center line, add yarns accordingly in layers towards the outer circle edge.

I did this in reverse at first, starting with the background color and finishing with the colors in the middle. It sort of worked but the result was a little bit messy. Then I figured out starting it from the middle like below, working outwards, which is a lot easier. 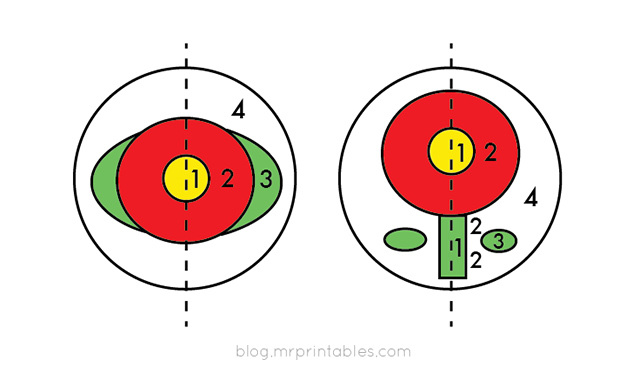 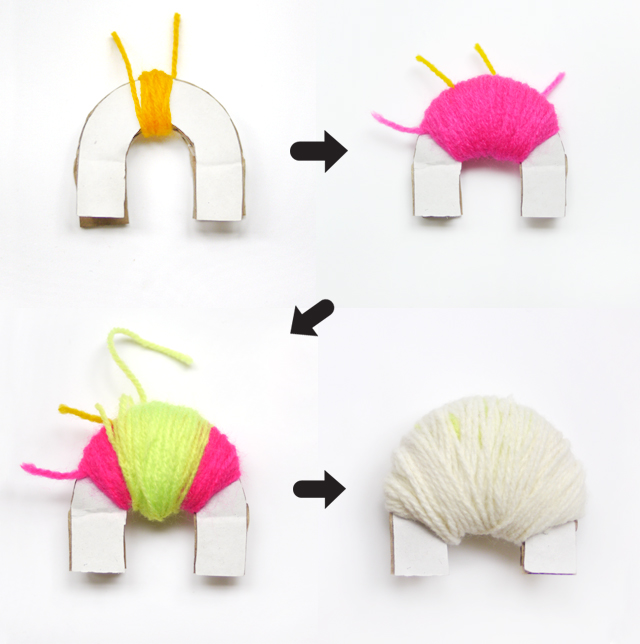 Got it? Now you can make anything into pompoms! I’m going to try next some animal faces, polka dots, stripes, little globes…. Fun!

4. Make the other half. I just made it with white yarn only but you can repeat the same thing to have the flower design on both sides. Don’t wrap the yarn beyond the fold lines. (Of course you can fold the end tabs first and then wrap it, which I forgot to do when I took these photos.) 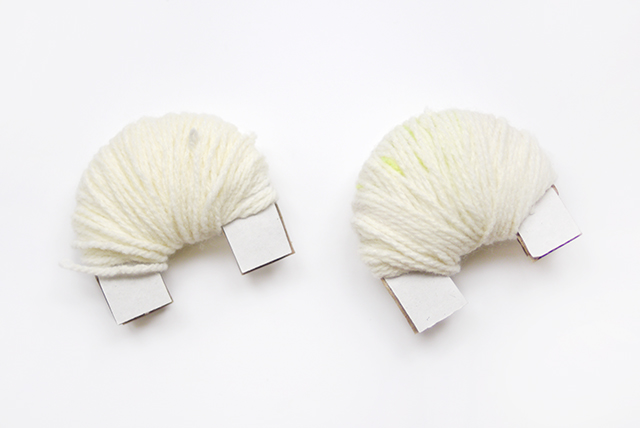 5. Now fold all tabs outward and bring the two parts together to form a whole circle. Clip the tabs together with binder clips as in the photo below. 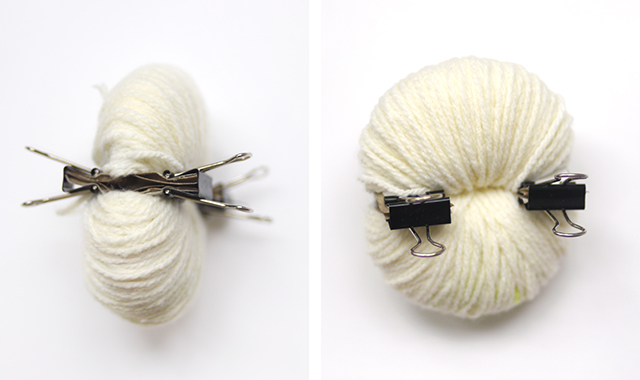 6. Insert scissors into the gap between the cardboard pieces and cut the yarn. As you do, the hidden pattern will be revealed like a blossoming flower which is an exciting part! 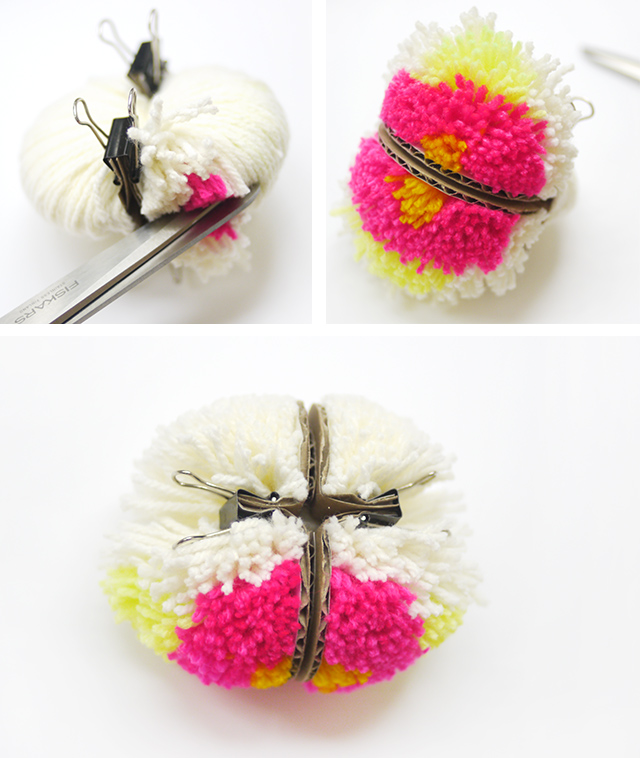 7. Insert a yarn between the cardboard pieces, running it all the way around. Pull and tie tightly. Choose a good position for tying it up as you’ll use that piece of yarn to hang your pompom. Now you can unclip the clips and pull out the cardboard pieces. 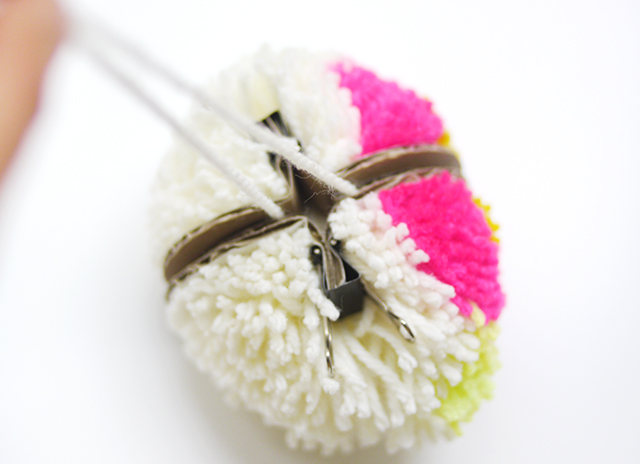 Done! The pompom will not be perfectly round so you’ll need to give it a bit of a trim to form a good shape.

Now what do we do with them?

I might use one to add to a gift wrap, or use it as a gift as it is. Hang it to a kid’s bag as an accessary or make a flower pompom necklace. Tease a cat or wear in your hair.

Or just admire them on your desk or hanging about the house. They cheer you up. 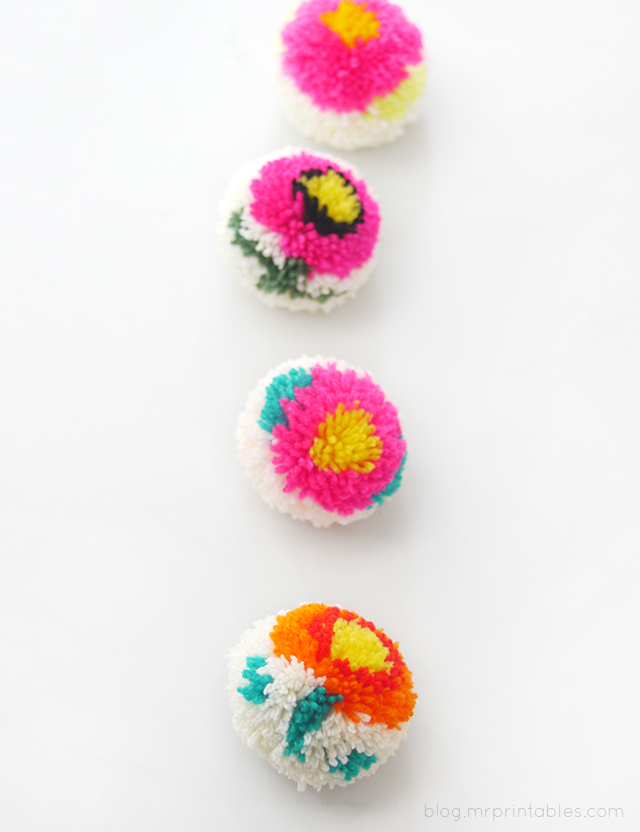 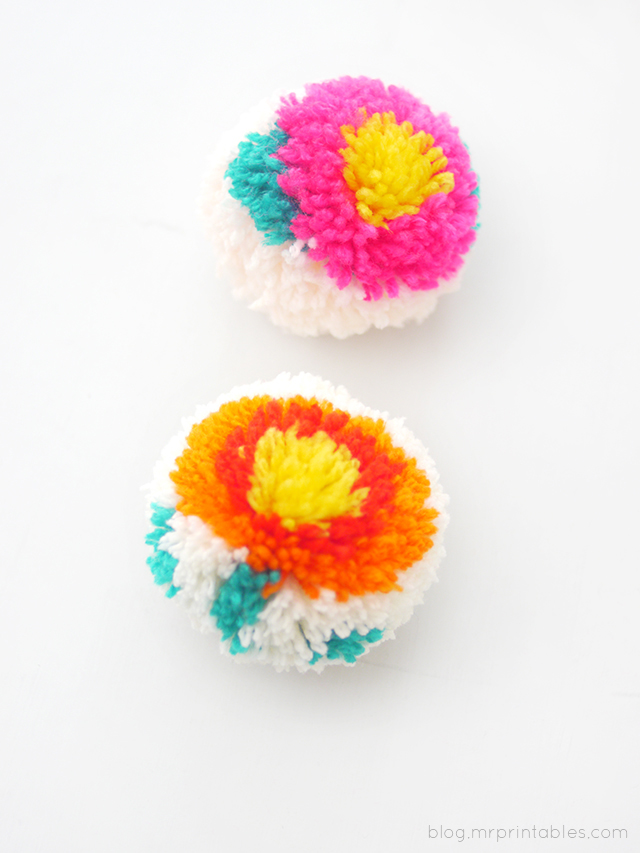 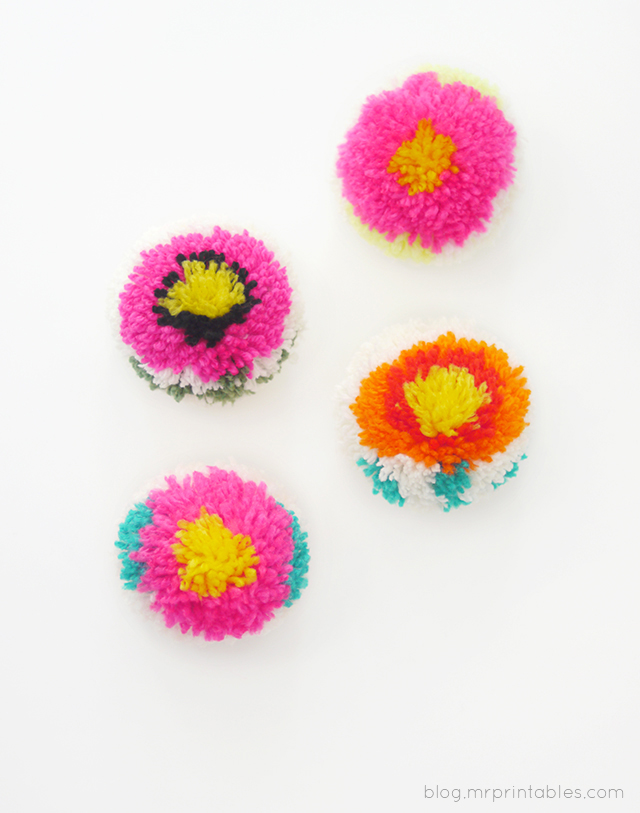 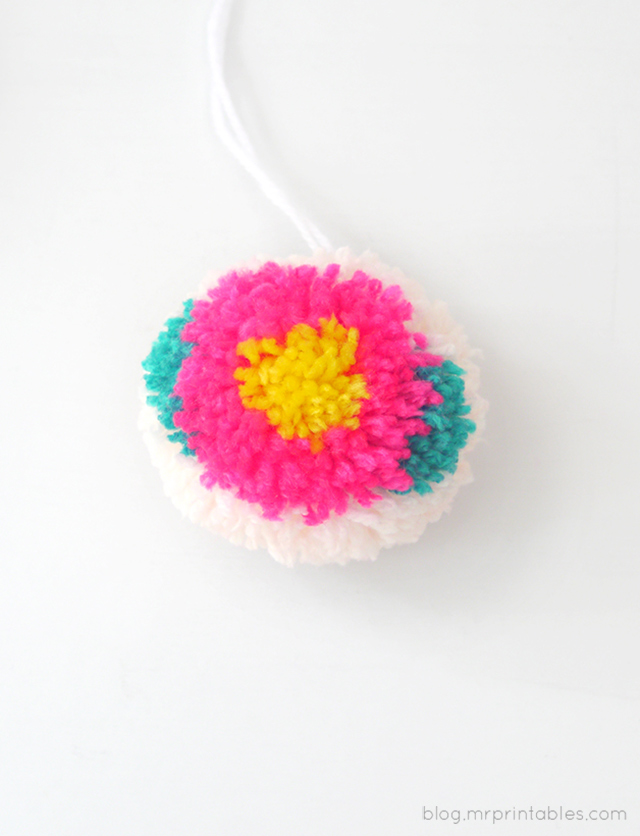 Hope you have a go at it!

We love your comments
← Bubbles of Fun
Modern Doll Houses →