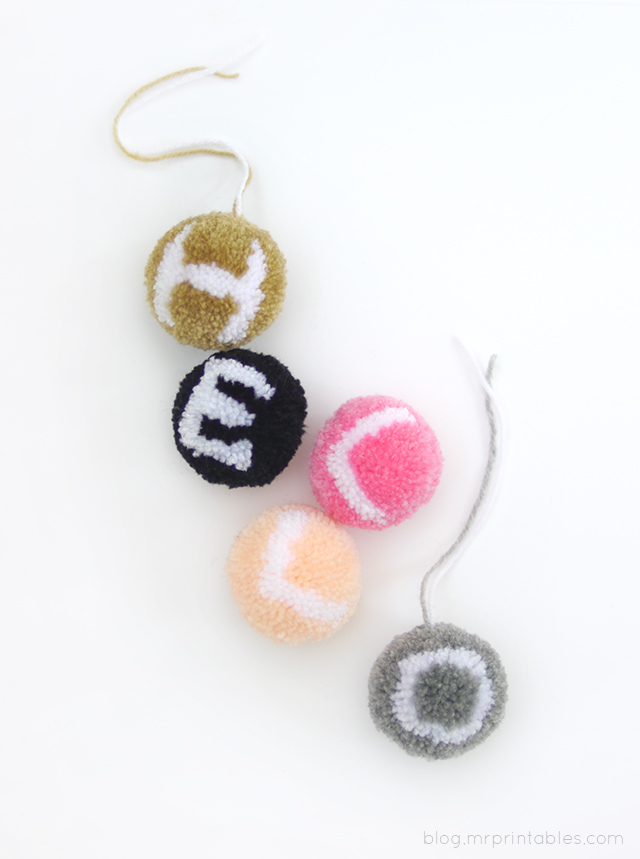 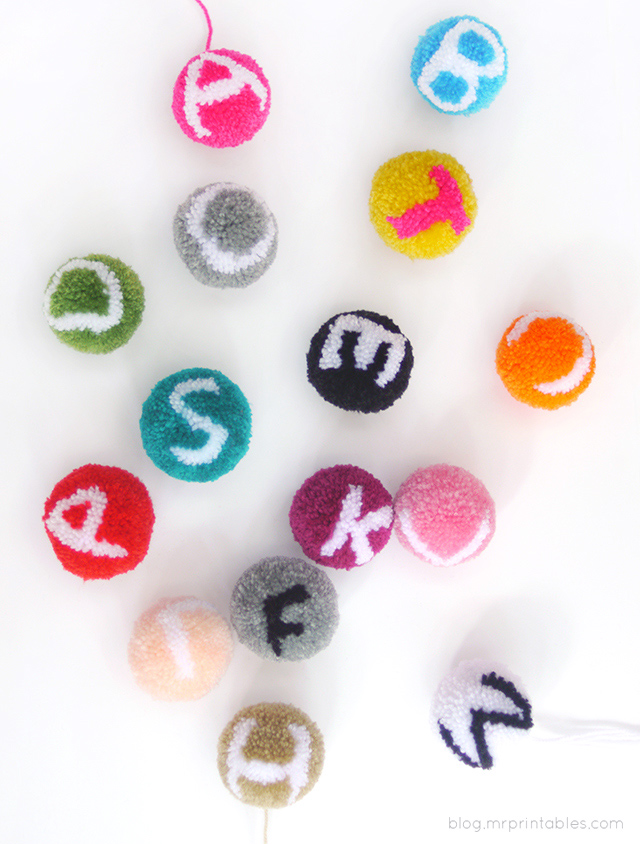 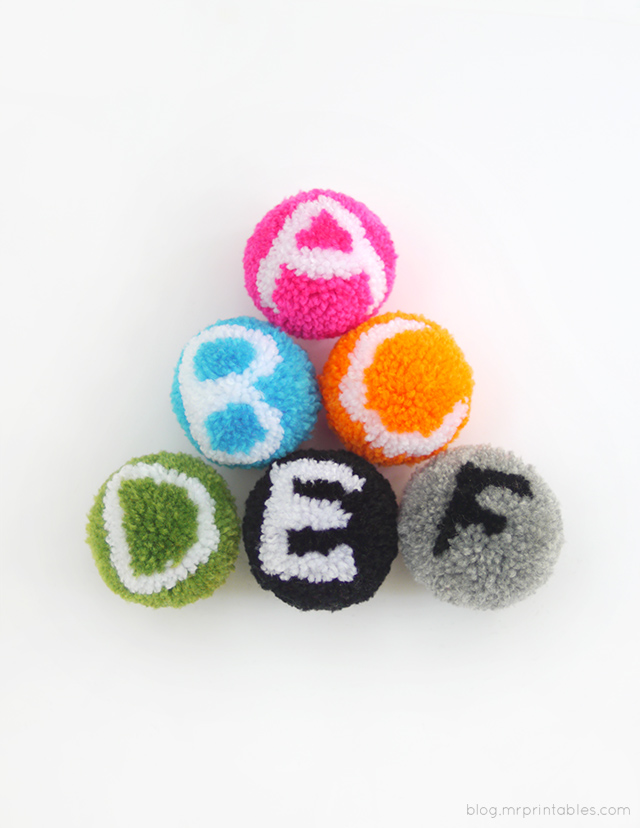 I really didn’t know whether I would make more pompoms when I tried the flowers, but since I made the animals I suddenly have so many ideas and now can’t wait to make more pompoms! All my to-do lists have floated out of the window. I seem to have been bitten by a pompom bug (pompom bug! Hey that’s another idea).

I wanted to try ABC pompoms because, then I have an excuse to make 26 pompoms! I just completed all 26 letters for the 3D alphabet templates which was a bit time-consuming so I came to my senses and tried a few letters only. Well, about fourteen.
I’ll try to explain the principal as much as I can, although I can’t explain every single letter I’m hoping you can try some and improvise. 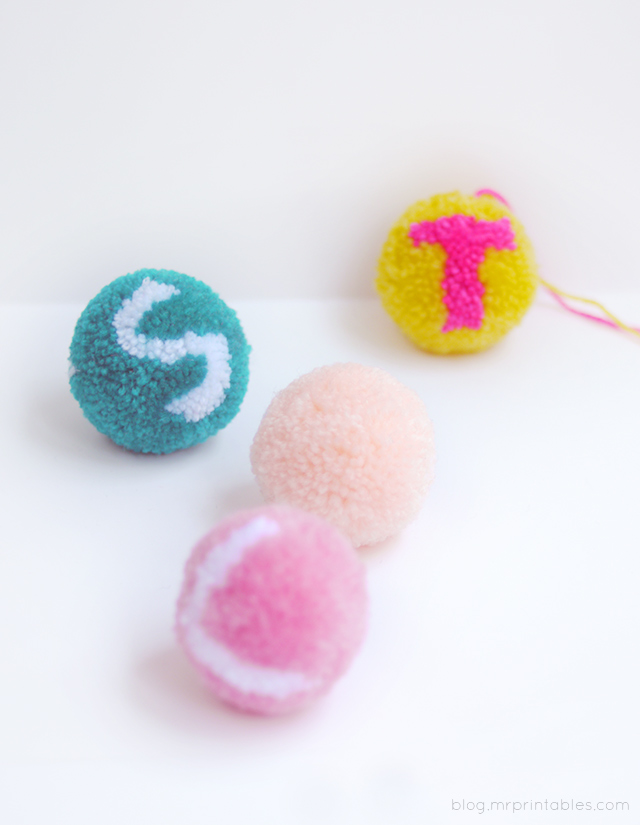 As with the previous tutorials, you wrap yarns in layers to reveal symmetrical designs. This is fine for all the symmetrical letters. For non-symmetrical ones like F, S etc, I came up with a new way using two different halves.

Drawn letters for reference, pompom maker (I’m still using the cardboard ones I made for the flower pompoms. They look very poor and unpresentable now.), fabric scissors, colorful yarns 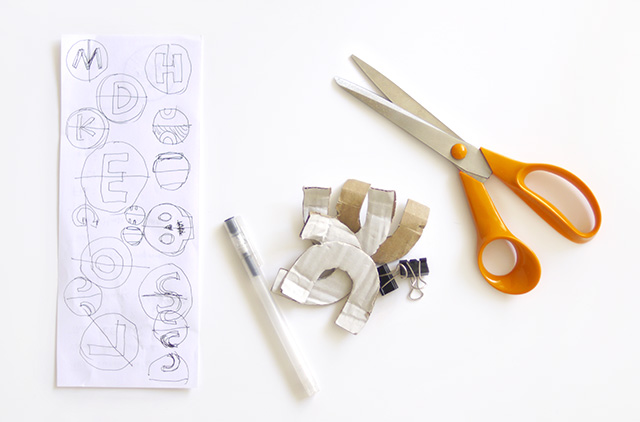 Start by drawing a letter and draw a line through the middle so it’s symmetrical on both sides. Turn letters like C,D, E etc by 90 degrees, or for L by 45 degrees for this symmetry as you see in my crappy drawings above.

Alphabet pompoms are a bit trickier than the animals ones. If you haven’t made pompoms before, start with the flowers and animals then move on to the letters.

How to make alphabet pompoms

Let’s start with A. 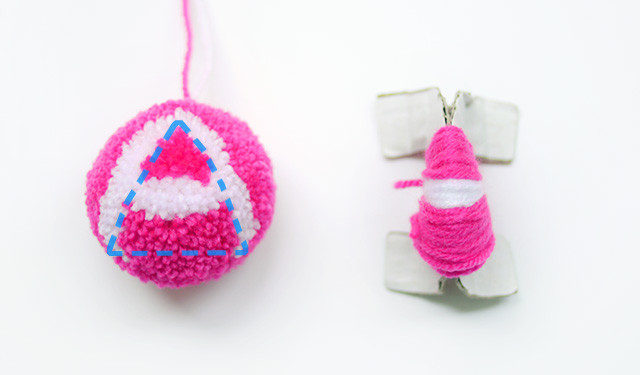 Start from the center. To create the area inside the blue dotted line first, you can wrap the yarn in a corresponding shape as in the pic. Imagine the shape for your final pompom, but make it narrower as it will expand when you cut it open. The very top is wrapped around only once for the pointy corner. Wrap more yarn gradually towards the bottom to form a triangle shape. 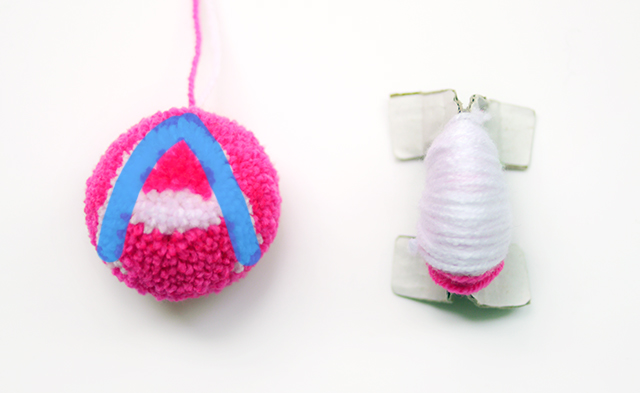 Now for the area marked in blue (the side bars of A), wrap all over the triangle. Wrap evenly in 3 or 4 layers.

That’s all for the letter A. Now you just need to wrap the background color to completely surround the letter.

I’ve made a few more instruction pics below for making other letters. You can then apply these techniques to any letter you want to make. 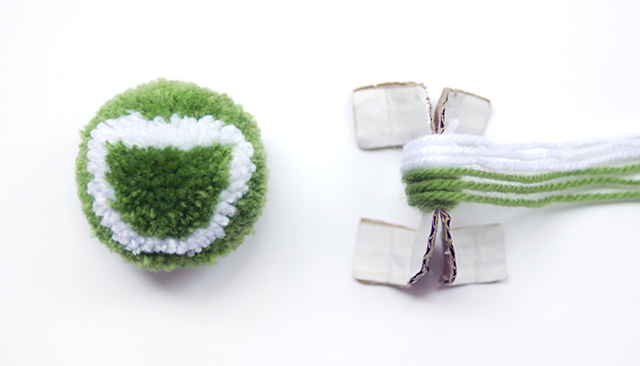 This one shows letter D, but turned around to make it symmetrical. To create straight lines in the letters, like in the D, E, H, T etc, you could prepare 2 different colored yarns as in the pic, hold and wrap them together next to each other. This will help building up the yarn outwards in a straight line and make the area where the 2 colors meet neater. 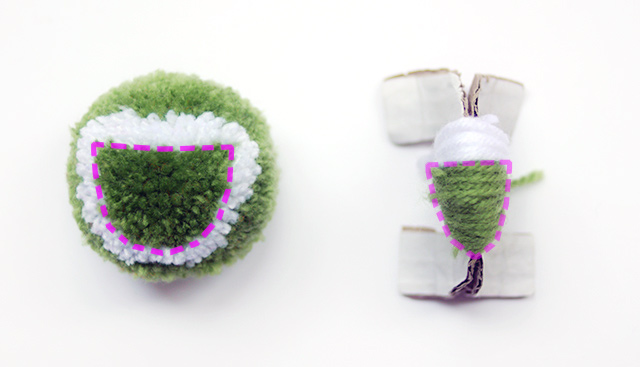 After wrapping for the straight line on the top, continue to fill the rest of the area marked with the pink dotted line with more yarn as shown.

Then wrap the sides of this evenly (including the white top part) in white yarn (or whatever color you’re using for the letter) to make the curved line. Finish with the background color. 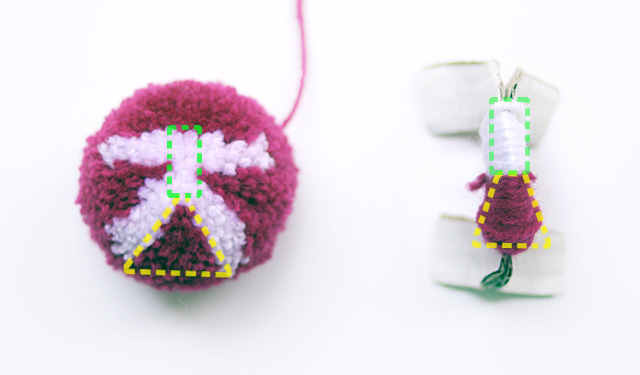 Here’s one more example: K. For this one, you can start with the areas in dotted lines. A bit of even wrapping for the top and a small triangle wrap below. 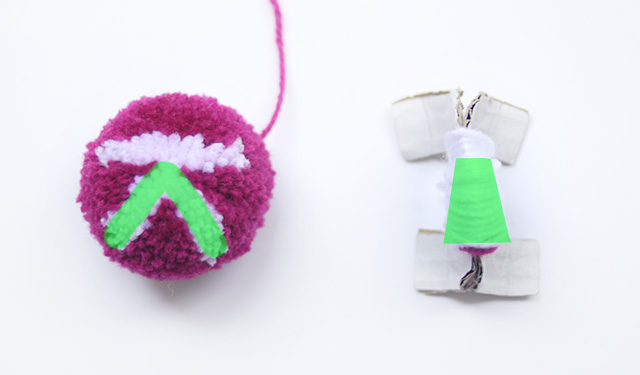 Wrap white yarn over the small triangle part for the diagonal bars marked in green. Wrap evenly on top of this triangle shape, which creates a bigger triangle. 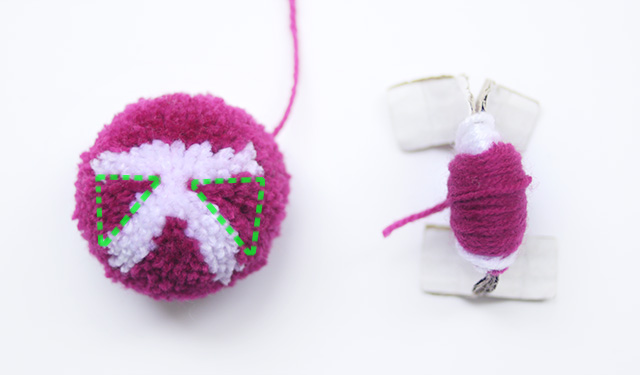 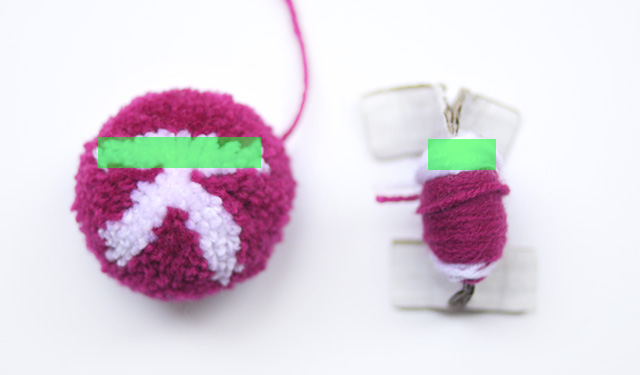 Wrap yarn for the top bar, wrap evenly outwards so you’ll have a straight line later. Finish by wrapping more background color yarn all over.

When you make letters including a V shape, like Y, W, M, you can do it by creating a triangle first and then wrapping around it evenly. L is made in the same way as V but with a wider triangle.

One more tip is for the non-symmetrical letters like F, P and S that I made. For these, split the letter in two and mirror each part. Here are a few examples explained in diagrams. Sorry for my crappy mouse drawing. 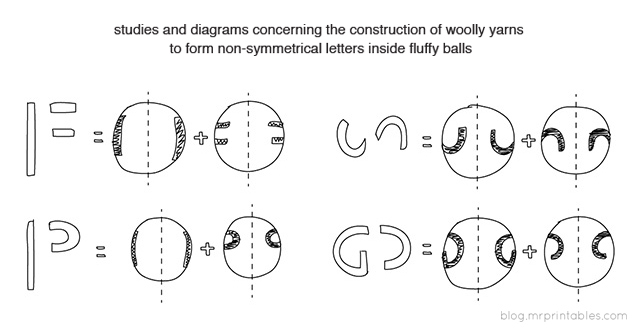 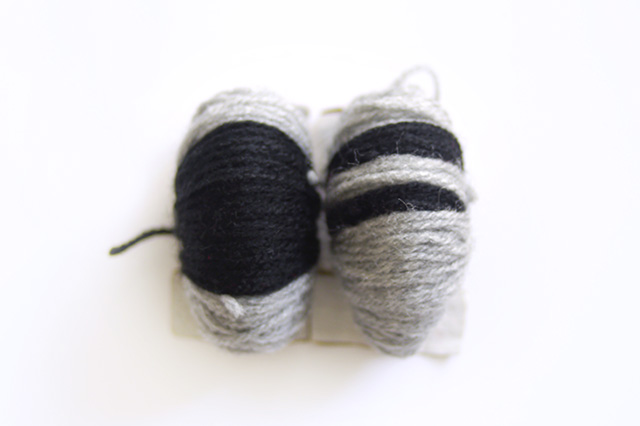 This is an example showing two parts for the letter F. You’ll be wrapping the background color first and the letter parts according to the diagram on the outer edge of the pom. When you cut them open those two parts meet at the edge to form a complete letter. You’ll end up with a reversed letter on the other side.

This is sort of the basics of ABC pompoms. There’s limited time and space for me to explain further but hopefully these give you an idea.

One last thing: when you cut the pompoms open, they will look nothing like the final letters but a mess. Don’t worry and just trim them ruthlessly! I was a bit timid at trimming first but these letters need more vigorous trimming than even the animal ones. Trim them enough so you end up with dense looking balls which will really help with the definition. Also sort out bits that are out of place (they sometimes get twisted inside so kind of comb it through with you fingers). I cut my family’s hair and there’s a worry in the house that I will trim them completely round next time. 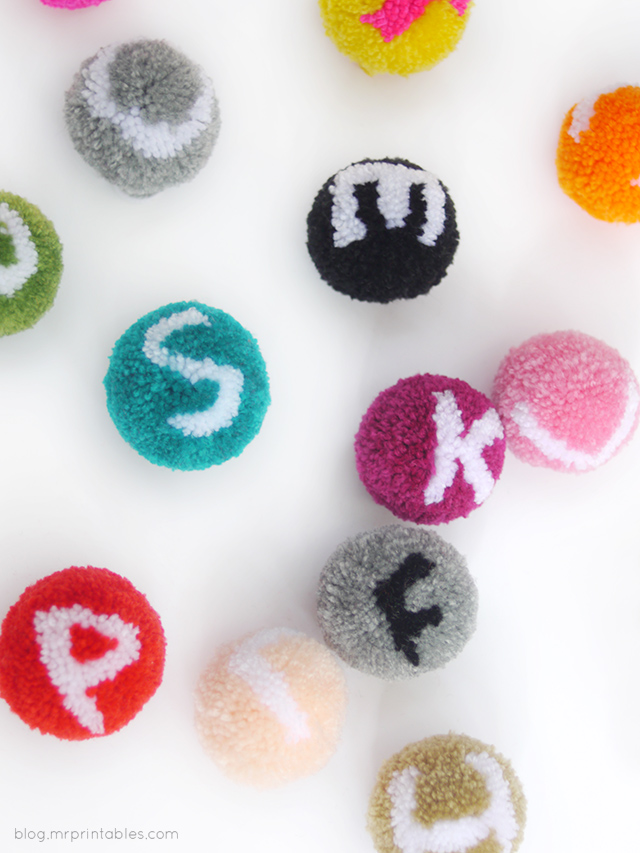 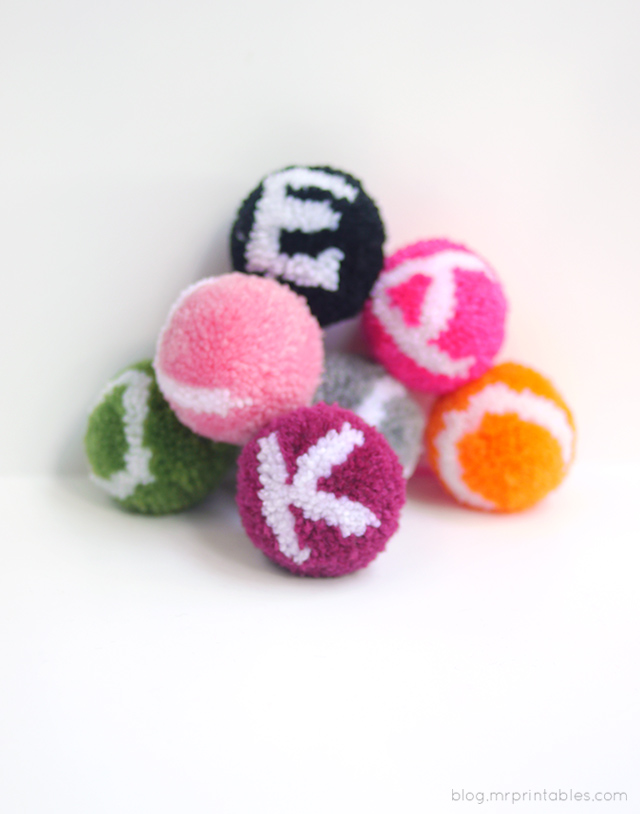 If you can put up with more pompoms, I have Halloween character pompoms coming up which should be really cute. Maybe you noticed the skull drawing among my letters in the pic above. I do get distracted easily.

Hope you enjoyed this tutorial.You can make kids names or initials to hang onto their bags and belongings. Even just one letter as a monogram accessary would be cute. 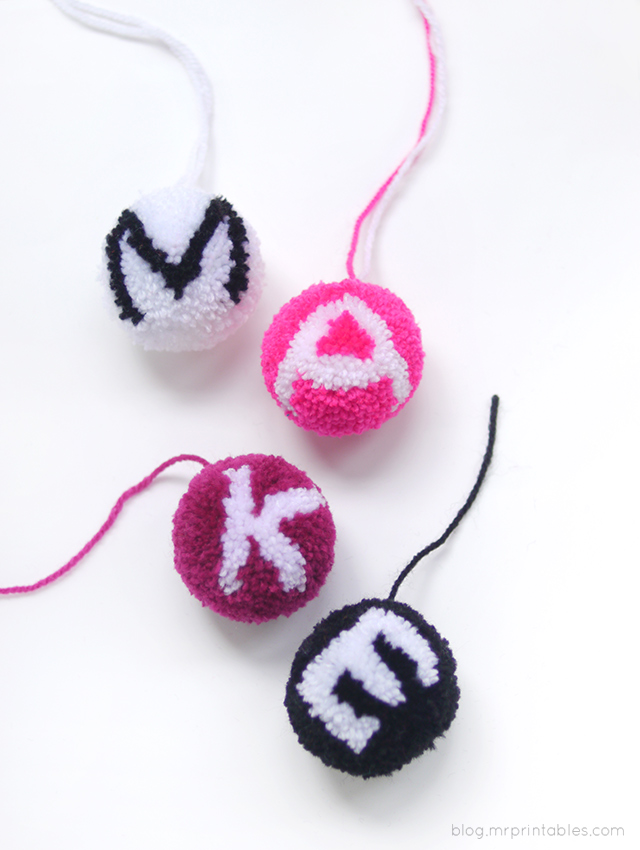 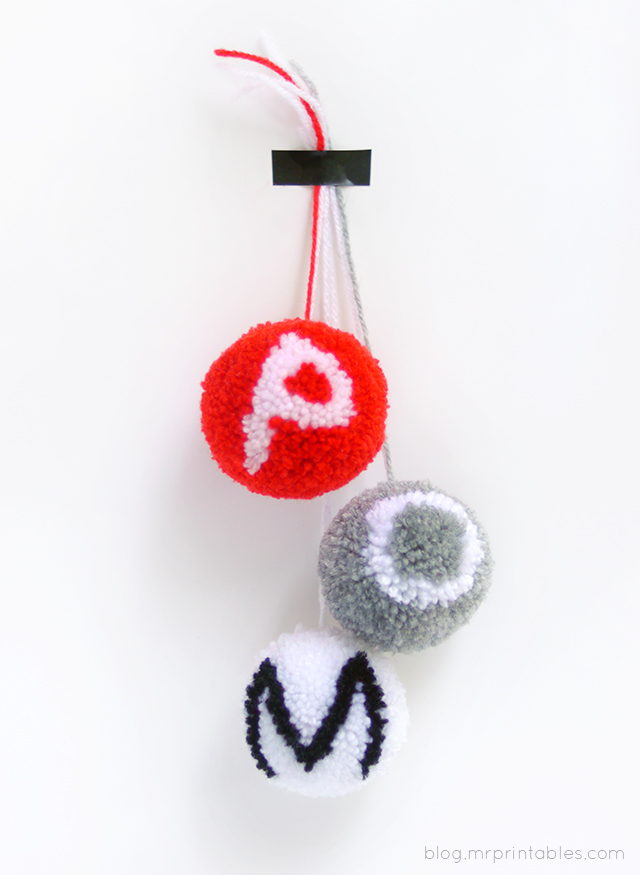 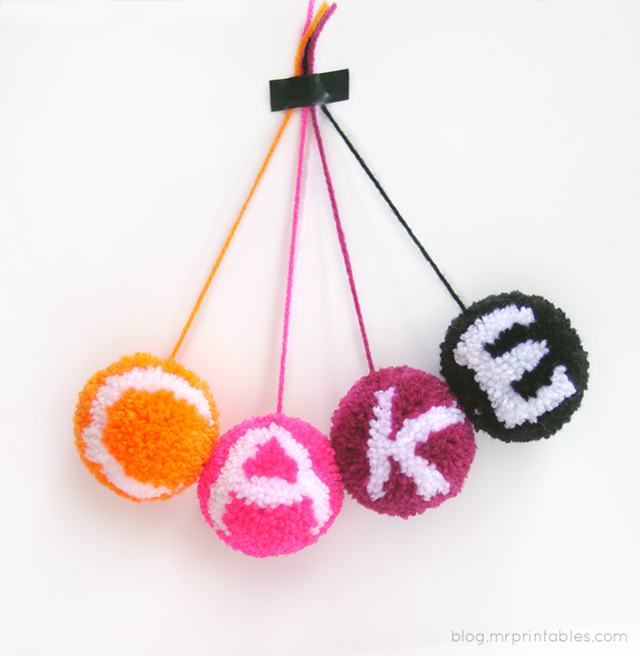 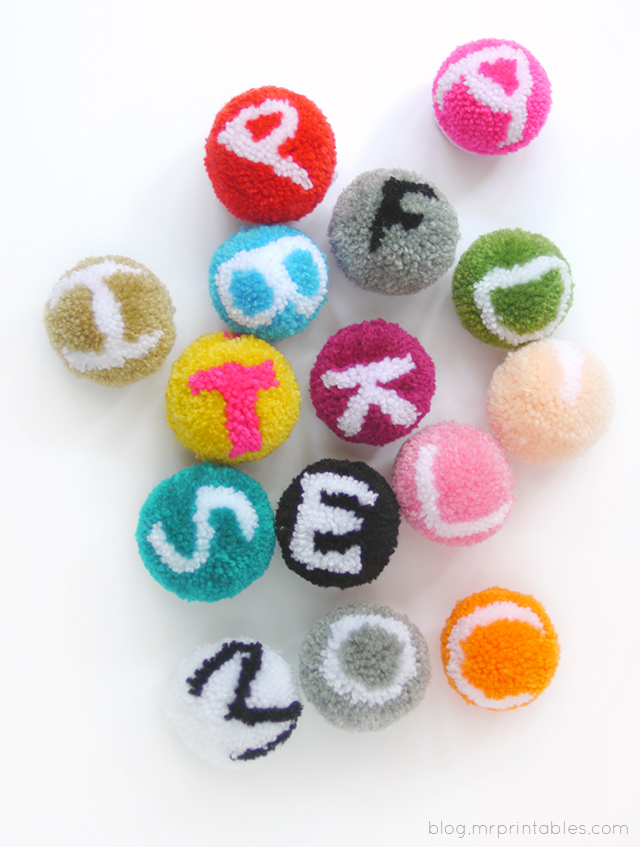